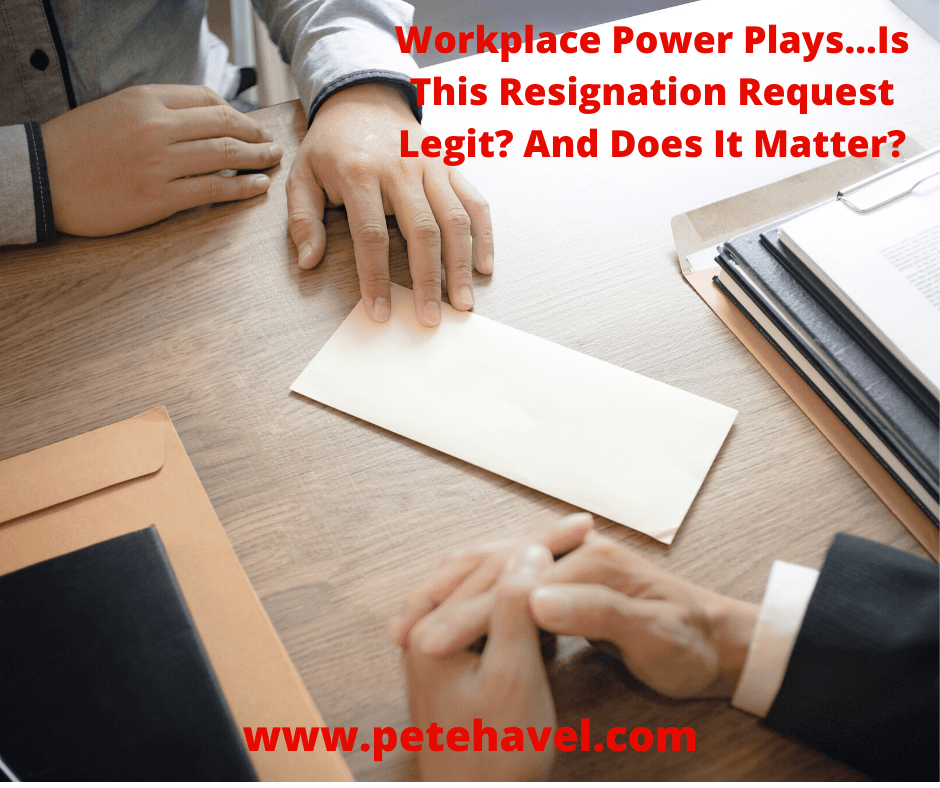 Been asked to resign? What to know about forced resignations

Home » Blog » Been asked to resign? What to know about forced resignations

I have been asked to resign.

“I’m the President of a small nonprofit in my county and was just asked to resign by a couple of my board members. I’ve been doing a great job. Something smells about this. Pete, what do you think is going on?”

That was the start of a phone call I received from Flo (no, that’s not her name) last week.  She was shellshocked and had no idea what had happened. I didn’t know Flo, but when you’re the author of The Arsonist in the Office: Fireproofing Your Life Against Toxic Coworkers, Bosses, Employees, and Cultures, you get some fascinating calls.

As we talked, I asked her about her time in the organization, trying to get a sense of what might have spurred this move by her Board. If, in fact, it was really was her Board doing the asking. She listed off exceptional revenue growth, a solid performance review, and some areas of performance where she had taken the organization from flops to fantastic.

So I asked her how she thought I could help her.  She said, ‘Well……, there are some things I haven’t told you.”.

I knew that was coming.

And here’s where my expertise in office politics–especially having been around the sordid, unethical kind–came in handy.

Having found myself in the depths of professional hell previously, I help those who may not be able to clearly think through a tough situation or have no one to talk with.

She went on to describe the lengthy battle regarding ethics that she had faced with a few members of her board of directors and staff.  The problem was that some people on her board and staff had no ethics. She had uncovered some sleazy, self-profiting, and self-indulgent activities and had urged that the organization clean up its act.

The rest of her board, according to Flo, was supportive of the general push for better behavior, as they knew they had some bad actors. But remember that in most organizations, a few loud voices trump a majority’s silence or indifference.

So fast forward into the middle of #Covid19 shelter at home orders, and Flo is asked to come into her office for a brief meeting with a few board members, including two of the ethically-challenged.  They blindsided her with a short speech that said:

Flo was heartbroken, and, as you might expect in cases where a person’s career is flashing in front of their eyes, inward-facing.  She thought, ‘What did I do wrong?’ It was only later after some additional consideration did she ask the questions of ‘What’s really happening?’ and ‘What do I do now?’

I’ll break my advice into two different checklists.  This first list, shown immediately below, applies to all situations:

Then the second list. Not all resignation requests are created equal.  Let’s look at what to do when being asked to resign from a toxic organization–especially one with significant infighting–where something just doesn’t feel right. If this resignation is more of a power play or an attack on you, here’s your list:

If you believe foul play is involved in the request for you to resign, slow the process down, and walk through things slowly.

And when do you fight the push for resignation and risk being terminated? Some will disagree, but I say you consider a battle like that in the way most countries look at fighting wars. That is, if you really think you can win, it’s an option. But it’s a high-risk one and often a battle that is stacked against you.

If your chances to lose are strong, then negotiate, move on, and live to fight another day. This is one more way to fireproof yourself from the Arsonists who burn down careers, companies, and cultures.

Have you run into circumstances like these? Do you have a story? Would love to know what you think or what you’d add to the list of things to consider.