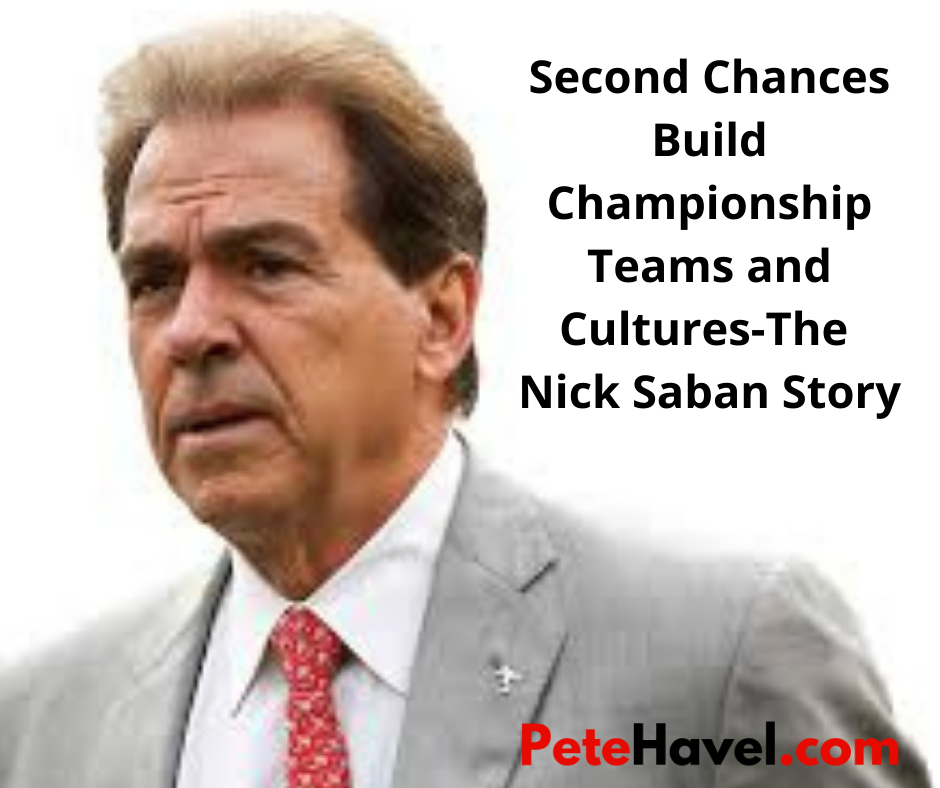 When it comes to winning, what’s your better path to victory? Doing the safe and expected?  Or taking smart, calculated risks that separate you from your competition and give you a competitive advantage?

When it comes to winning big, Nick Saban knows a lot. He won big at Toledo, Michigan State, LSU, and most recently built a program at Alabama that’s the envy of every university in America.

He’s done it with immense talent on the field and massive financial support from boosters who love a winner.

But what’s separated Saban’s program from others is his ability to take risks on people, his understanding that we’re all human, and bet that people are often better than the worst moments in their lives or any one experience.

That belief in 2nd chances has helped build championships.

He’s given opportunities to players–young people who have made mistakes and needing someone to give them a redemption. A break. That 2nd chance.  Check out Saban’s passion in the video below and prepare to run through walls after hearing him.

He’s also provided 2nd chances to coaches–people who are skilled, experienced, and who royally screwed up.

People like Lane Kiffin.  He was a hotshot coordinator for University of Southern California who became, at that time, the youngest head coach in NFL history with the Oakland Raiders. He was cocky, got out over his skis, and was sent packing after 2 seasons. He went on to lead the University of Tennessee Volunteers, then cratered in a sea of controversy. He then bounced from place to place over the next few years–back to USC where he was unceremoniously pulled from a team bus on the way back from an embarrassing loss and told he had been fired (and needed to find a ride home).

Kiffin had hit an extremely low point. And where other programs saw disaster, Saban saw opportunity.

That is, he thought that if he could create the right parameters, Kiffin could succeed. Saban hired Kiffin to become Alabama’s Offensive Coordinator.  It wasn’t a perfect relationship, but Kiffin went on to serve as Bama’s OC through 2017, and they won 2 national championships. Kiffin was also a finalist for the Broyles Award, given to the nation’s top offensive coordinator.

Saban knew he was taking a risk when he hired Kiffin, but was willing to bet on the upside.  He got it.  Until Kiffin was hired in December, 2016 by Florida Atlantic University as its new head coach just as Alabama was preparing for the College Football Playoff in January.  Reportedly, the deal was that Kiffin could remain as OC for the playoffs if he concentrated on the task at hand–winning another championship for Alabama.

When Kiffin strayed from that plan, Saban didn’t hesitate. Kiffin was sent packing. As they say, the “juice wasn’t worth the squeeze”. Saban told Kiffin to not let the door hit him on the way out. (Kiffin’s now gone on to Ole Miss and just got rewarded with a new contract after early success).

In Kiffin’s place, Saban brought in a new offensive coordinator just weeks before the FCS Championship Game against Clemson–Steve Sarkisian. It wasn’t a full-time job, but it was a chance–an audition. A step toward redemption.

Sarkisian needed some redemption. He had won as a player, and had been an offensive coordinator at USC and head coach at the University of Washington. Then, he was hired back as head coach at USC and disaster struck. Sarkisian was dealing with alcohol problems (slurred speeches to alumni and smelling of alcohol in coaches meetings) and was fired from USC.  Hello, Rock Bottom and whisper campaigns about whether he’d ever be back in coaching. Saban made sure his USC troubles weren’t the end of the Sarkisian story.

That game and Saban’s second chance–gave a platform to Sarkisian to be visible again. Exactly the opportunity he needed.

In that time, Sarkisian molded the once predictable Alabama offense into a high-powered, balanced attack.  And Sarkisian’s success, which benefited Saban and Alabama as well, just landed Sarkisian one of the most high-profile, high-paying roles in college sports: head coach of the University of Texas. The Sarkisian stint at Alabama was a win-win for everyone. And a reputation and life was rebuilt.

Nick Saban’s support of second chances doesn’t come without risk, but it does come with potential high reward.

If you’re a leader looking for someone on your team and you want to experience Saban-level success, don’t flinch on giving talented, hungry people a second chance.

But it starts with a few key mindsets:

Want to lead a team to the top? Follow Nick Saban, who gives 2nd chances to people willing to play by the rules and deliver professional excellence.  Don’t be afraid to bet on people who know exactly how important their opportunity is–and how tough life can be without one.

We all want a second chance. But we can never expect one if we don’t give one. Try it in your career, company, and life and see what happens.