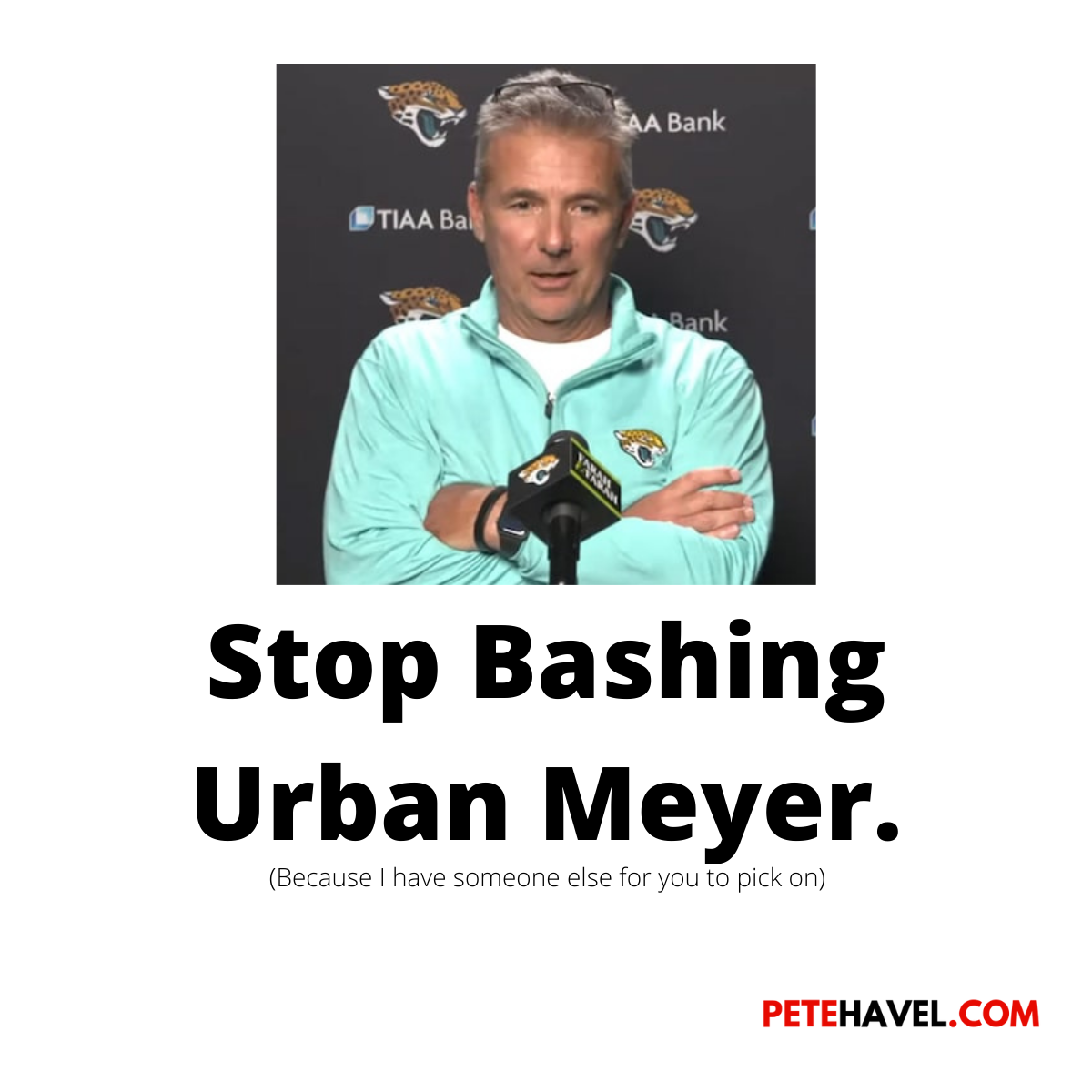 By Pete HavelDecember 21, 2021No Comments 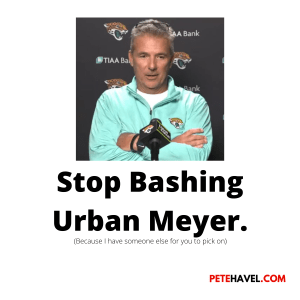 I’ve seen a lot of stories over the last few days talking about how bad Urban Meyer is. I say that’s been mostly a waste of time.

I specialize in dealing with toxic workplaces, companies wracked with scandal, and awful bosses. In fact, I wrote a book about it–The Arsonist in the Office. But I’m always left with the feeling that we put too much blame on the wrong person. Because a known toxic boss is a problem and they come and go–and are hopefully never put in leadership or managerial roles again. But the person who knowingly hired them is something far worse–that is, they had the power to do something right, but knowingly made a decision that they knew could hurt others.

Sure, blame Urban Meyer, the toxic trainwreck of a football coaching legend who lasted only 13 games as the head coach of the NFL’s Jacksonville Jaguars, for his disastrous time in JAX. But mostly blame the guy who knew what to expect from Meyer, researched his past, and hired him anyway.

What exactly did Meyer do? Plenty, including:

But the person who really deserves blame? The owner of the Jaguars, Shahid Khan. He bought the team in 2012 after they were struggling through a 5-11 season. But under his ownership, the team has declined even more—one 10 win season aside, they’ve earned 2,4,3,5,3,5, and 6 wins. This year, they might squeak out 2 if lucky.

Khan is to be admired in some ways, as life is complicated and many successful people have damning blindspots.. Born in Pakistan, he came to the U.S., he worked hard at jobs to pay his way through college, making as little as $1.20/hr. And he took a $50,000 SBA loan and parlayed it into a successful automotive parts business that eventually acquired Flex-N-Gate, a maker of bumpers for major automakers that now has nearly $9 billion in annual revenue.

But Khan fundamentally failed as the owner of the Jaguars when he hired someone with all the behaviors to do far more harm than good.

Leadership are responsible for the culture of organizations. It’s that simple–no one else can do it.

If they take a pass on their cultural duties or consciously decide to toss a sociopath the keys, it shouldn’t be surprising that bad things happen.

What did Khan ignore about Meyer? EVERYTHING about a leader who won short term victories, but wrought long-term destruction that he left behind and patterns that show exactly what a managerial and culture mess Meyer was, including:

But, Meyer won on the field and brought national titles–and with it multi-million $$$ contracts…and this is where leaders chasing short-term victories get it wrong. Meyer was a mixed bag of success and toxicity, but the toxicity had a much longer effect than the success. National titles yes? National scandals, yes to that too. In fact, they weighed on his ability to survive at Florida once the media began to sniff around. After a short break due to a publicly-announced departure from football to take care of his health and family, Meyer moved on to Ohio State University–where it became clear that Meyer’s lack of management/leadership style hadn’t changed.

But it should have been his last.  What should Khan have done and what should every leader in a hiring role do do? Know who they’re hiring and understand what the dramatic impact of hiring a highly toxic, destructive leader can be. Those key areas include the following:

But, at the end of the day, Meyer’s actions are to be denounced. He’s responsible for them. But the actions of Khan’s deserve the most scorn. He put Meyer in Jacksonville knowing what all of us would know within a few Google searches. Meyer was bad news.

Hire good, ethical leaders–or face the consequences and the blame. And if they don’t want to lead, they should sell their teams. Tomorrow.

It’s good to win the right way–which means winning with people who aren’t setting you up for future failure and chaos. But turning your team over to someone who burns things down everywhere they go? Reckless. Short-sighted. Dangerous.

Urban Meyer is a Class A jerk. But without Shahid Khan hiring him, Meyer would have never destroyed the Jaguars season and beyond.

Leaders, take your job seriously. Own your culture–and make it exceptional.

Pete Havel is a consultant, keynote speaker, and trainer on workplace culture and leadership for organizations ranging from Fortune 500 companies to nonprofits to government agencies. He’s also the author of “The Arsonist in the Office: Fireproofing Your Life Against Toxic Coworkers, Bosses, Employees, and Cultures”, named a #1 Hot New Release by Amazon in 2019. You can contact him at pete@petehavel.com or call 214-244-7906 and learn more about Pete through his website at www.petehavel.com