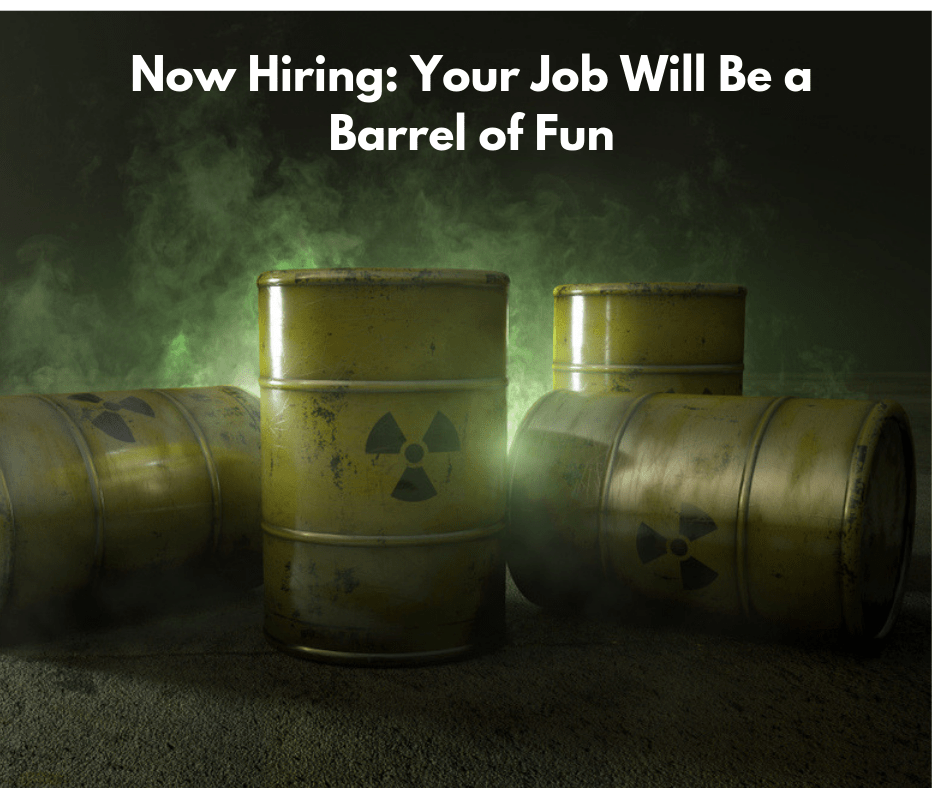 Bad $18 Million Jobs, Chernobyl, and how Hazmat Suits Can Save Your Career and Sanity

Home » Blog » Bad $18 Million Jobs, Chernobyl, and how Hazmat Suits Can Save Your Career and Sanity

Wells Fargo might as well be trying to sell timeshares at Chernobyl right now and they’d have better luck than trying to hire a new CEO. Look at these headlines.

You remember the Wells Fargo (WF) scandal, right? I’ll forgive you if your response was ‘Which one?’  There were lots of them. They included:

That’s not a series of isolated incidents.  That’s a systemic breakdown of standards–it’s a toxic culture of epic proportions.

Let’s run with the SFGate.com headline of Hazmat suits–it’s a great metaphor to describe what awaits the lucky person who chooses to take on the DIY project of reforming Wells Fargo.

Things are so dicey at WF that the Federal Reserve has capped the bank’s size until they feel comfortable with the myriad of cultural and operational changes that have needed to be implemented.  And the Feds need to approve the new CEO.  This isn’t just oversight–this is a corporation having to wear an ankle monitor and check in with a parole officer from a regulatory standpoint.

Despite all that, the last CEO, Tim Sloan, was paid $18 million in 2018–$14 million in salaries and another $4 million in incentives and bonuses.  But despite the expected windfall for the next CEO, according to a report out of the Wall Street Journal today, top financial services execs are uniformly taking a ‘hard pass’ on this ‘opportunity.

I’m guessing it’s the same reason no one else should walk into a job of any toxic organization willingly without a lot of assurances.

Just like a real hazmat crisis, you have NO idea what you’ll be cleaning up, what is lurking under the surface, what the long-term effects might be on you, and whether the hazardous situation you’re working on is the only problem.  Plus, of course, you have the people inside the organization who may be wanting to spill another load of ethical, operational and cultural into the organization’s eco-system.

What do hazmat heroes like the next WF CEO need to think about before entering a toxic environment?  Almost everyone likes a challenge, but what do you specifically need to know in any tough situation?

Finally, be aware of the long-term effects of contamination.  Your reputation, your physical and psychological health, as well as your resume can be affected by the move.  Whether it’s the hazmat cleanup example or the ‘Smelly Car’ episode on Seinfeld, the toxic environment can stay with you for a while.  The reward of cleaning up a company like Wells Fargo can be high, but the risk can be too.

Let me know what you think.

If you want to see exactly how high the risk can be, check out my book, The Arsonist in the Office: Fireproofing Your Life Against Toxic Coworkers, Bosses, Employees, and Cultures and you’ll be measuring yourself for hazmat attire for the rest of your career!