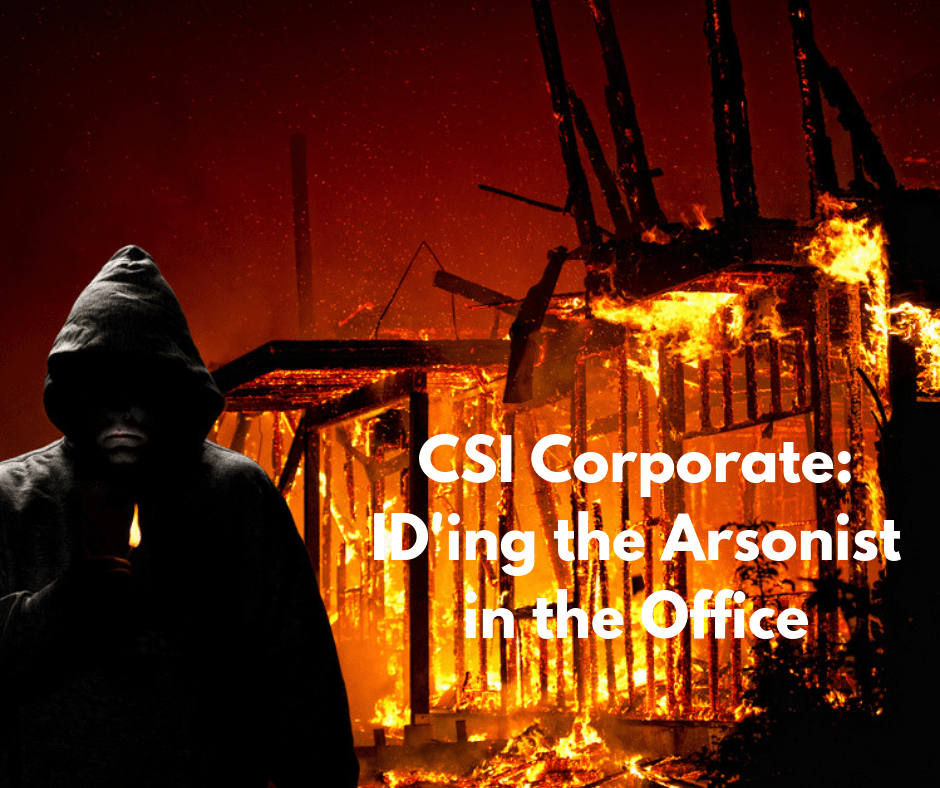 Identifying The Arsonist in the Office

Home » Blog » Identifying The Arsonist in the Office

My book ‘The Arsonist in the Office: Fireproofing Your Life Against Toxic Coworkers, Bosses, Employees and Cultures‘ starts with me walking into a new job and being blindsided with the mother of all onboarding sessions.  Sitting across from my CEO, he said he wished he could have told me his ‘news’ about my new role and the live grenade he was about to drop in my lap, but he didn’t think I would have taken the job if I had known.

So, instead, I got a surprise.  My career was about to change forever.

He began to read off the organizational ‘rap sheet’ of the colleague I fictionally call ‘Hazel’.  She was the employee with whom I was supposed to partner in the organization. His presentation was a tale of sabotage, professional smears, wild accusations, threatened lawsuits, 30 or more complaints against people from top leadership on down, and that doesn’t scratch the surface.  He went on to tell me he had protected himself from Hazel by removing the line of reporting from her to him and passed along the risk to another supervisor.  But he also said she presented such a high risk to the organization from the outside, so the decision had been made not to terminate.

I sat speechless, as he then said that if I didn’t fully understand what he was saying, he had a story to explain Hazel–as though that was really necessary!  And, as I would understand all too well soon enough, I wondered how do you deal with someone who has been told they’re too toxic to fire.

He told me about a volunteer fire department (real or imagined–it was his story) that had faced a huge increase in fires in recent times.  For a while, people in the community reacted to the fires shocking, random events or perhaps a crisis due to lack of rain, bad luck or climate changes.

But then some around their community got suspicious.

They soon learned that these fires were manmade–and started by the firefighters themselves.

The fires started because of some people wanting new fire equipment but knowing that the previous levels of fire activity would not merit new expenditures anytime soon.

Others, responding to the sudden interest from their department in new fires, had contacts who might want their business burned down to get insurance money.

Others had revenge on their minds and suggested that the property of those they didn’t like as targets for destruction.

A few enjoyed the many congratulations they would regularly receive for fighting fires–after they themselves had started the fires.

He told me that this story–in its entirety–embodied who Hazel was.

She was, as he coined it, ‘The Arsonist in the Office’ and her actions mirrored those of the arsonists that we hear about in the news every year.

The U.S. Fire Administration highlights each of the above motivations as top reasons arsonists do what they do:

These traits are common in those who criminally torch buildings, but they’re identical motivations to those who torch careers, companies, and cultures.

Does this sound familiar?  From your colleague, boss or maybe even you? 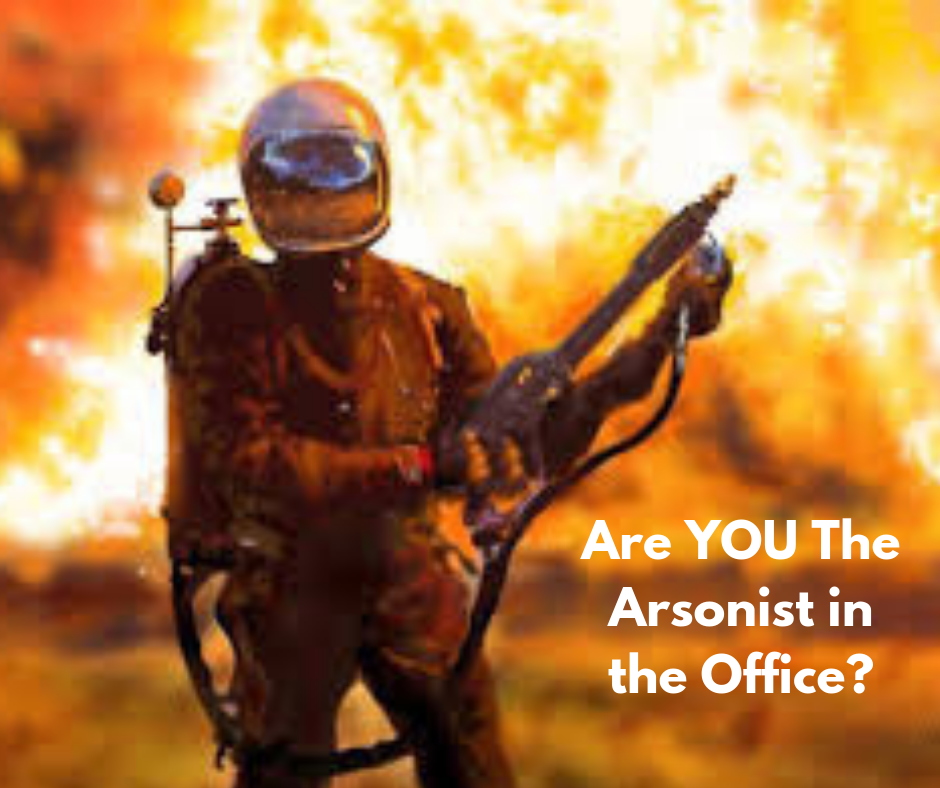 When it comes to building POWER within your organization, do you know someone willing to burn things down to help themselves? Are they willing to cut corners, skirt the ethics of the organization and do whatever it takes–no matter what ‘it’ is–to get ahead.

Will they destroy others, disrupting projects, sabotaging work product of colleagues, hurting reputations to get that raise, promotion or other things that lead to their own FINANCIAL gain?

Do they retaliate, gaslight, or destroy camaraderie and comity because they don’t get their way?  Do they find yourself justifying their behavior as being something that people had ‘coming to them’?

Do they seem to enjoy the ADRENALINE RUSH from seeing a colleague rebuild after an attack against a colleague?

Do they create problems because they want to be the HERO that ‘solves’ them?

Have they COVERED UP bad things they’ve done in the office by starting fires elsewhere?

If any or all of the above ring true, you have found an arsonist and you need to use caution!  And, if you’re in a management or leadership role and you can make a difference, you need to take a fire cannon to this problem.

Arsonists often are among the most charming, charismatic, and productive people in organizations–which, mixed with the propensity for destructive behavior–is a dangerous combination.

As with criminal arsonists, doing nothing when someone sets a fire in your workplace activities and culture is not an option.  It’s a recipe for disaster.

Arsonists take down companies, they shape legacies in the worst of ways, and they can take out a career.  They’re the problem you knew you needed to watch out for, but you convinced yourself you were smart enough to monitor and never let the problem get out of control.  That’s what a lot of former CEOs and managers say.

Now that you know what you’re looking for, you’ll need fireproofing tools to ensure that you and your organization aren’t the next targets.

I will discuss ways to fireproof yourself from arsonists in an upcoming blog article, but you can also check out my book ‘The Arsonist in the Office: Fireproofing Your Life Against Toxic Coworkers, Bosses, Employees and Cultures’ by clicking HERE which will provide a range of tips, tools, a leadership and management call to action, and my own adventure in the culture gone horribly wrong.

It’s so much easier to build and protect a strong culture from the outset than it is to pick through the rubble and try to salvage what’s left after the arsonist is done.

Is your organization prepared from a cultural standpoint to deal with arsonists or is it letting people do a slow burn throughout your organization?  Does it have a plan in place to block fires before they can ever start?

Let’s fireproof our organizations–I would be honored to help show you how–from start to finish.

I welcome your thoughts and feedback.