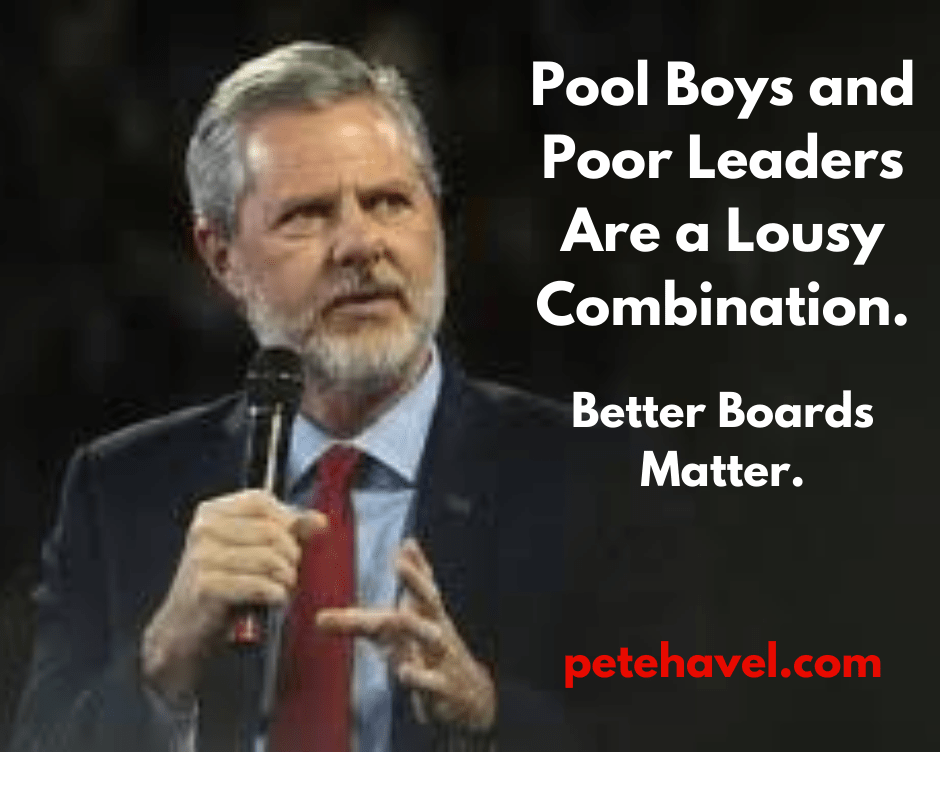 Bad Board of Directors- Pool Boy Scandal Is Major Problem

When you’re the leader of the largest Christian university in the United States, the last words you want associated with your brand are: zippers, scandal, sex, and pool boys. But Liberty University and a bad board of directors just made that a reality.

But that’s exactly what Jerry Falwell, Jr., now the former President of Liberty University, has forced into the headlines with his embarrassing lifestyle, blackmail sex scandals, and bizarre relationships.  To keep this blog family-friendly, we’ll leave it at that.

Falwell’s an embarrassment, no doubt about it, but over the last 18 months, he became a huge reputational risk for the University he led.  That’s bad on him, but it’s a far worse indictment of the Liberty University Board of Trustees.  There were deeply troubling stories coming out a year ago with more than enough breadcrumbs of scandal to follow to investigate…but the Liberty Board did nothing. Self-dealing, stories about Falwell’s unusual alliances and actions far outside the bounds of Liberty’s self-professed standards were at every turn.

And then in the last few weeks, after Falwell posted pictures of himself and his administrative assistant posing with their pants unzipped and the latest revelations of a 3-way relationship with his wife and a pool boy, the wheels came off completely. Falwell took a leave after Zippergate, but resigned this week shortly after details of a long-term tryst involving Falwell, his wife and a pool boy went viral. 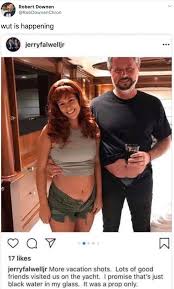 But the big question is where was the bad Board of Directors and why were they silent? Falwell had gone rogue in his personal conduct, but he was accountable to them, right? Apparently, the board members believe they’re literally not at Liberty to hold him accountable or speak up. Yes, at Liberty University, board members are muted from day one and then in perpetuity.  According to a Liberty attorney (as quoted in a September 9, 2019 Politico article), “All trustees sign a confidentiality agreement that does not expire at the end of Board service.”

Discretion is admirable, but paralysis of duty is not.

Why the  inability to act? Because of a broken governance structure that made it easy to remove Board members who got out of line with Falwell.

That’s a recipe for disaster.  When a board fears the staff, bad things happen. It’s a balancing act yes, but a staffer isn’t supposed to run a board.

While not meddling in the day to day operations or making decisions outside their power, all boards should focus on the following:

Liberty’s bad board of directors chose to do none of the above.  Specifically, they ignored their fiduciary duty to protect one of the organization’s most unique assets: the brand.

Liberty has a distinct brand. It’s the reason many attend the university and it has a national following. Agree or disagree with them if you choose, but their brand is built on faith and values.  And Falwell’s actions–and the board’s inaction–have left that brand in tatters.

How can board members do the right thing for their organizations and themselves?

In the end, we know Jerry Falwell, Jr. was flawed, but we also know that a group of good individuals can make a bad board of directors.  If you’re on the board of an organization and wondering how it can build a stronger and more ethical governance structure, let’s talk.