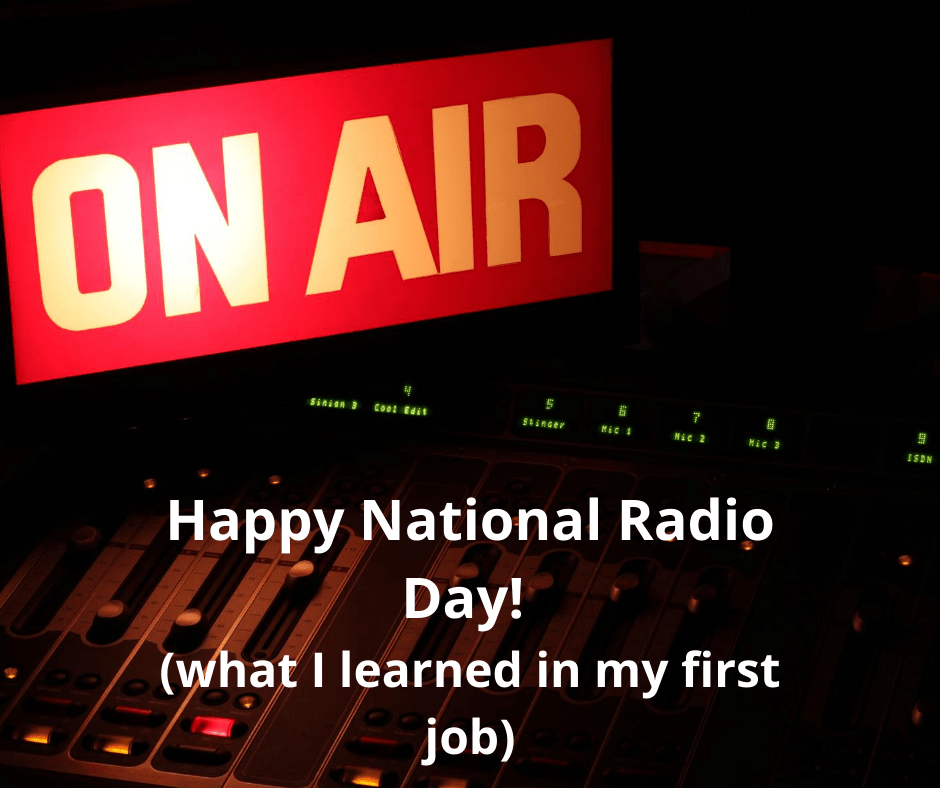 I was 13 and the year was 1983. And I wanted to be the next broadcasting star. I idolized news anchors on TV, but I especially admired sports anchors. I wanted to be one.

I knew every statistic of every game and studied them every night. I remember lying down in my family’s living room, putting the newspapers on the floor as I literally soaked up every bit of sports knowledge that I could.

Yes, literally.  As I would lay on the newsprint and press down while reading the pages in front of me, some of the newsprint and stories would transfer over and the ink would end up on me! Arms. Stomach. Chest. Newsprint everywhere.

One day right after school let out for the summer–and in Massachusetts, that was usually  mid-June–I walked into my local radio station, WKOX AM 1200 in my hometown of Framingham, Massachusetts. 50,000 watts of broadcasting greatness.

I wore a tie that day because I knew that meant I meant business. And it was a clip-on, so it was easy on and very easy off.  I entered the dark, wood-paneled lobby and the receptionist was on the phone. I sat down briefly, looking at the wall of fame in front of me, as it showed the radio hosts from the station–both current and former–with all levels of celebrities and wannabes. I waited for my opportunity to jump in and work my magic. She eventually got off of the phone call and looked in my direction. I jumped to my feet, introduced myself,  and walked over to her desk to make my sales pitch.

“Hi, I’m Peter (now I go by Pete, but I was named after my Dad and I got called Peter because it made it easier to know who she was calling to) Havel and I want to work here. I love radio and I want to be an anchorman. Can I have a job?”

She took my phone number, said they’d call me back, and I left.

I wasn’t cynical enough to know at that time that someone saying they’ll call you back may mean you’ll never hear from them again, but I waited patiently–for an hour or so.

Then, fidgeted impatiently for the next week.

Until THE CALL came.

“Peter, this is Deidre (I think that was her name, but maybe not) from WKOX. I have some good news for you. You’re hired!” she said.

She explained all the details, when I should arrive at the station, and then, as I assumed was customary for all hires, asked if my Mom could talk to her.

They chatted for a few minutes, came to some sort of understanding and my Mom served as part-negotiator/part-traitor as I heard her make her soul-crushing concession ‘Oh, I think he’ll be happy to be there. You don’t have to pay him.”

I wasn’t happy with whatever had just transpired financially, but I viewed it as the first step to certain stardom. And knew that if I worked hard, my luck would change quickly

I was assigned to work with the crack morning talk show team of Dave Scott and Sandy Gresham.  They were both true professionals–in very different ways.  Dave was serious and regimented.  Sandy was lighthearted and engaging. But they met in the middle in their styles and hosted a very entertaining show built on their personalities, the topics of the day, and a steady flow of guests they’d interview.

My job was to work with Dave and Sandy, but mostly to help the producer. I don’t remember her name, but she gave me lots of work.

“Can you file this?”

“Can you call this Roseanne Barr person’s staff and tell her we don’t have time to talk with her that week?” (Yeah, that happened.)

I did whatever she asked. And got pretty good at it–whatever I was doing.  Apparently, all that I did, I was starting to do the work of the producer.

And how did I know that? Because I walked in one day and the producer was no longer there.  She had been let go, as was explained to me, and I would fill her role.

I was now producing the show, though I really don’t remember whether they gave me the title.  Booking guests, answering the phone lines when listeners would call in, getting Dave drinks at commercial breaks and, most importantly, never doing anything stupid.  Or let anyone know how old I was–Sandy would have been fine with that, but I think telling callers I was 13 wasn’t a part of the show’s brand.

And there was even bigger news–I was getting a paycheck! $5 per hour! That summer job was going to become my pathway to great things.

Over those next few months–and actually a few years when I moved into other roles like serving as producer of the nightly sports talk show–I had some amazing experiences, including:

Here’s the video link to the rap if you can handle it (I’m the first male ‘artist’). Warning: it’s a little rough around the edges.

But more than anything else, I learned that opportunities are out there if you show up, ask, and work hard.  Those lessons have worked well for me as a political candidate back in the day, legislative staffer, lobbyist, fundraiser, and now author, speaker, and trainer. Don’t ever quit asking for opportunities and never stop working hard for those who help you.

WKOX doesn’t exist anymore, but I’m grateful for everyone there who helped a pimply, awkward teenager with a little ambition learn a lot about how to succeed.

Pete Havel is a speaker, trainer, writer and consultant for companies in need of a more productive and principled workplace culture and stronger leadership teams.  He’s the author of “The Arsonist in the Office: Fireproofing Your Life Against Toxic Coworkers, Bosses, Employees, and Cultures” .  He can be reached at pete@petehavel.com or 855-662-7766.  To get your signed copy of ‘The Arsonist in the Office’, go to www. arsonistintheoffice.com for the paperback or head to Amazon for the e-book or audiobook version.

What did you learn from your first job? Good, bad or ugly!