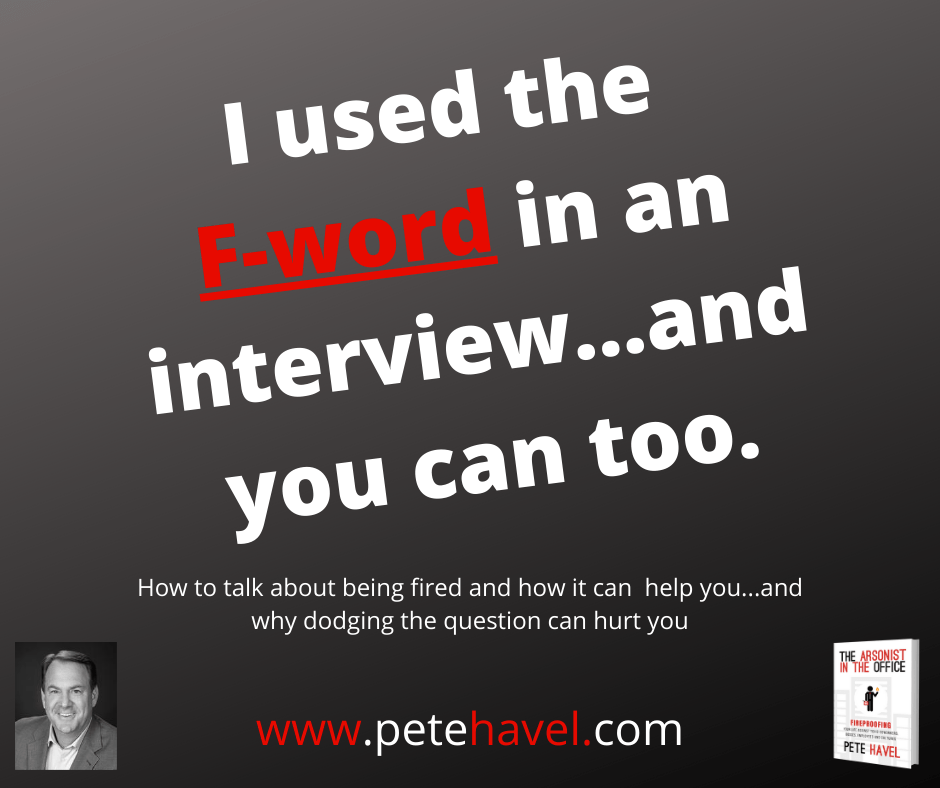 Should I tell an interviewer I was fired?

Home » Blog » Should I tell an interviewer I was fired?

Should I tell an interviewer I was fired?

I used the F-word last week in an interview.  They say don’t do it, but it felt so good.

In the right situation, I think you should try it.

Oh, I’m not talking about THAT F-word–that one’s a little risky with a stranger. I’m talking about discussing the fact that you’ve been FIRED–and why it’s not only OK, but maybe a benefit to you and your prospective employer.

Now, you don’t want to use this advice in situations where the company that fired you would never disclose the circumstances or if you found a job so quickly after being fired that your departure doesn’t raise eyebrows. If you don’t have to say something about being fired, don’t.

But sometimes you have to.

And for those who face that challenge, I’ll give you some perspective and my own experience on how important it is to not say everything, but be prepared to say something about a black eye moment that can turn into something that makes you look good.

I’ll give you the back story.

There I was sitting in an interview shortly after being fired (no, it was stronger than being fired. It felt like a mafia hit only with HR paperwork involved) and I was asked the question that made me sweat.

I knew–or at least I thought I knew–that I couldn’t give the real answer. I couldn’t begin to tell them what had really happened. I left under bizarre circumstances. Mine was a story of dysfunction, shocking ethical lapses, corruption, policy failures, wanton sabotage of clients and vendors, and behavior by a colleague that rivaled anything you’ve ever seen while flipping by the Lifetime Network (if you need to know exactly how strange, check out chapters 1, 3, 5, 7, 9, 12, 14, and 17 of my book, The Arsonist in the Office: Fireproofing Your Life Against Toxic Coworkers, Bosses, Employees, and Cultures)

When I said something about a situation that any rational human being would object to, I found myself out of a job…and with a major problem. How do I explain this fiasco?

I hired someone to help me come up with an answer that would not set an interviewer’s hair on fire or cause so many red flags to wave that you feel like you’re at a Chinese military parade.  Because the absolute must-do rules about problems on your resume have always been that you can’t bash your employer and that you should never say–unless you absolutely have to–that you were fired.

So my consultant–I call him ‘Clarence’ in the book–said that, if asked, I should say that “I had accomplished everything I wanted to at my previous job and it was time to move on.”

It was a nice attempt at throwing a little dirt into a gigantic hole, but I tried it.

Back to the interview…

“Well, I was there for X years and I accomplished everything I wanted to. It was time to move on and find a new opportunity.”

The leader of the group interview said respectfully “Pete, are you telling me you left a job for no good reason other than you wanted to walk away? You’re a quitter or a liar, but I don’t know which.”

Womp. womp. womp. And with that response, I didn’t get that job (obviously). And I missed on many more.

Why? My non-answer was probably worse than whatever a more honest and open assessment might be.

There are risks to both. And sadly, if you have to explain the unexplainable, there always will be.

If you’re in a position anything like I was (and am today), you need to think through a few areas and ask yourself some questions:

I say all of this to you because I’m someone with incredible opportunities in front of me, but I’m also facing the fact that Covid-19 may have an effect on my paid speaking, training and consulting business for a long time. So I move ahead daily on building my platform, selling books, selling my game-changing consulting and training services, and building new offshoots of my business (resumes, career coaching, and others that are in the works), but I have no idea what the future holds. At this time, who knows what the future holds.

So, when I see a job these days that’s a great fit for my experience in government affairs, association management or strategic communications, I apply.

So last week, I interviewed for a role with a top-flight organization and, as is always the case, we went through my resume job-by-job.

When we reached my trouble spot, I did something I’ve shied away from in the past: I was transparent.

I said I was fired from a role for reasons I think would make me a good fit for their organization. I talked in general terms about the circumstances, but in my case–I’m literally an open book. My story and my experience are there for the world to see–and for you to learn from.  I pointed to their own job description and said that what they wanted in a leader is who I am. But that not every organization has their high standards.

The response was very positive.

But if I had ducked the question, obfuscated, and just changed the subject, I would have never told them what makes me better and different than any other candidate.

Not everyone writes a book on surviving career implosions and no one needs to sit in interviews dredging up the awful things we sometimes see in other companies, but everyone who’s faced being fired for hard to explain reasons needs to think about how they can turn that debilitating moment into a strength.

If that’s you, I’d love to help you. For help on really stick, complicated career issues, reach out to me at https://petehavel.com/career-services/