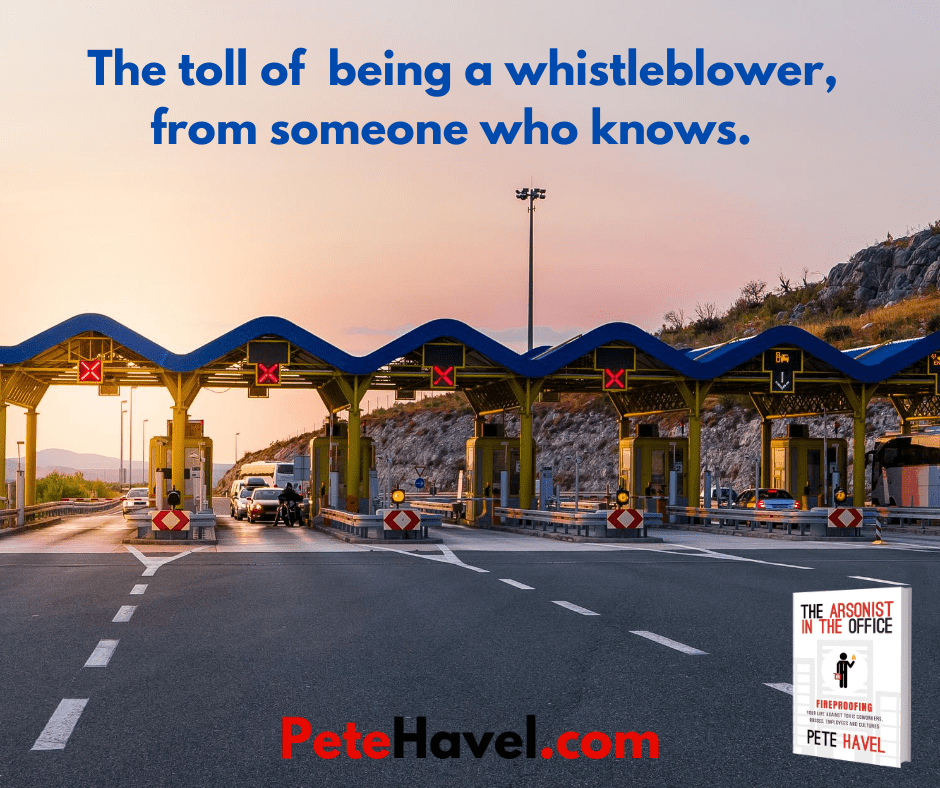 The Cost of Speaking Up in Your Workplace

Home » Blog » The Cost of Speaking Up in Your Workplace

So many people give lip service to wanting others to be the squeaky wheel. Governments say “See something, say something.” But in practice, do most organizations really want that? I say no. In many workplaces, it’s not viewed positively. It’s important to talk about the cost of speaking up in your workplace.

I heard a radio ad yesterday from a law firm trolling for people who want to blow the whistle on their companies for fraudulent use of PPP funds. The ads say whistleblowing’s the right thing to do and whistleblowers can cash in by getting a piece of what the feds take back.

Sometimes whistleblowing can be the right thing to do and some whistleblowers do receive financial gain.  But you can also pay dearly. For anyone hearing these ads, keep reading.

I say that because I’ve never been a whistleblower if you look at the dictionary’s definition of one, but I’ve been treated like I had. And it can be brutal.

I was an employee discretely trying to get my organization to deal with a ticking time bomb of an employee who had made threats and complaints against people throughout the organization and scared them and their decision-making process into submission.  They called her ‘The Arsonist” for her destructive abilities and openly feared what she might do to them if triggered by any action against her.

And I  learned what organizations with a bad culture and weak leadership can do. That is, eliminate people who identify the problem.

And, in my book, The Arsonist in the Office: Fireproofing Your Life Against Toxic Coworkers, Bosses, Employees, and Cultures, I describe it as the moment when I didn’t know if I needed an HR meeting or a visit with law enforcement.  “The Arsonist” had begun to behave in ways not seen since the last time you turned on the Lifetime Movie Network’s Movie of the Week.

When I spoke up internally and asked my leadership to put an end to the aberrant behavior I was getting, I put them in a position where they felt the need to act. The cover-up had gotten out of control and was about to be exposed.

And act they did.  It came down to a decision that someone had to go–and who would they throw overboard–the employee they feared might destroy them with leaks, lawsuits and allegations from the outside or me–the one who felt embarrassed to even broach the subject of the chaos, much less go outside HQ.

So I was terminated. And then threatened by HR with being buried in legal fees if I spoke to anyone externally about what happened.

Termination and threats are often included in the whistleblower experience, but I wasn’t a whistleblower. I was a guy trying to do the right thing for my company, my family and my career.  What I said was what every organization says they want–feedback when there are problems. But some don’t mean a word of it. They punish those who identify embarrassing issues.

Whistleblowers, who often remain inside the company at least at the beginning, face additional problems if they are identified, including:

And what does it do to the companies that conceal, concoct and villainize their employees raising a concern? Nothin’ good.

So what’s on the positive side?  I never have to worry about whether I had the integrity to speak up against something deeply wrong and dangerous inside my organization.  And I’m helping people throughout the world–executives, managers, or ordinary employees–deal with broken organizations or the problems that can end careers and destroy cultures. And no threat or termination can stop that.

If you hear these ads or you’re in any other tough decision that requires speaking up, know the benefits. And the cost of speaking up in your workplace.